Redwood Uprising: From One Big Union to Earth First! and the Bombing of Judi Bari 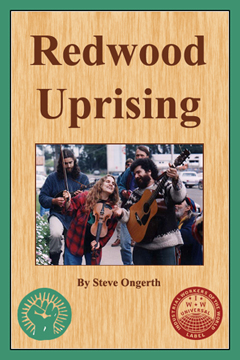 The two were targeted because they represented a viable democratic, populist, grassroots challenge to the powers that be, in this case, Corporate Timber, and its established paradigm of total control over the redwood forests of California’s North Coast and by extension—as you will see in this book—America’s forests in general, the modern timber industry, and capitalism itself. They stood upon the crest of a wave of change that was poised to undermine the existing order, and she was more than willing to ride it to its conclusion. That wave was a confluence of both environmentalist and labor movements and, if left unchecked in its course, it could very well have washed away institutions, both “private” and “public” that were, by many people’s accounts, corrupt and rotten to their very core.

This book chronicles these struggles and how a divided community began to overlook their differences and fight against the real outside agitators: multinational corporations. The struggle is no less relevant today as multinational corporations continue to receive massive bailouts, working people struggle more and more just to make ends meet, and global warming threatens not only old growth forests, but civilization as we know it.

The book will soon be available in hard copy, but in the meantime, the individual chapters are being released weekly on this site. To read them in order, visit this page.

The most recently published chapter is featured immediately below: